The United States is not foreign land to Dah Theatre, a Belgrade-based activist theatre group. Dah has travelled to the U.S. nearly annually since its first visit for the culture program during the 1996 Olympics in Atlanta. Since then, Dah has become renowned and respected in the American theatre world.

“I was not even aware how Dah Theatre was respected there [United States]…we were like stars there,” said actress Ivana Milenovic Popovic, a member of Dah since 2008.

It has been a long journey for Dah to garner the international reputation that they have now. Dah was established in 1991, at the beginning of a series of destructive wars that resulted in the dissolution of Yugoslavia.

Since Dah’s first visit to the U.S., it has formed and sustained many partnerships with American theatre artists. 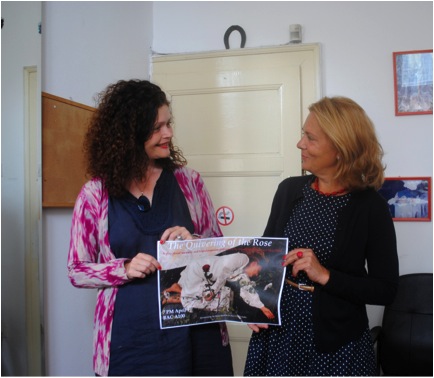 “We were not going there [U.S.] consciously to make an impact. We went there because we were invited,” said Dah’s director, Dijana Milosevic. They have, however, made an impact, and in return invited many American theatre artists to Belgrade to train at their institute, including Heidi Howard, Artistic Director of 7Stages Theatre in Atlanta.

“Over the last 15 years, I have had an exchange with them [Dah] going back and forth, studying with them, using their technique, and their inspiration, ” explained Howard.

7Stages has collaborated in teaching and performing with Dah since 1996, including two big productions about immigration and public execution. “It was a goal not only to just create together and work together and share in each other’s methods, but to look at positive things in human nature,” said Howard.

Dah and 7Stages are continuing that collaboration. Together, with Café Antarsia Ensemble in Chicago, they are working on a piece for this fall, “Previously Blue,” which will look at “the devastations people have caused on the earth,” said Howard. The online fundraising page for this project explains it as “a poetic summit on disaster, resilience and beauty.” On May 31, they reached their goal of $10,000.

“We know about fantastic, heroic deeds that people did in the wake of disasters, tremendous solidarity [and] generosity…that is what we want to explore…what the media present to us is just a little piece of the big puzzle of how do we respond to catastrophes,” Milosevic said of the upcoming production. In addition to impacting and working with American theatre companies, American academics and audiences also learn from Dah.

Dr. Dennis Barnett, Associate Professor of Theatre Arts at Coe College in Iowa, has worked with and done research on Dah; he saw them perform for the first time in 2001, and “was amazed by it,” he said. “I waited to meet them afterwards and set up an interview for the next day…they’re now my dearest friends,” he added.

Barnett brings a group of American college students to Belgrade every other year to work with Dah. “My students come away incredibly inspired, moved…there’s an entirely different level of learning that goes on when Americans are watching their work” he said. In the fall, Dah will perform “Previously Blue” and do workshops at Coe College.

Visiting colleges is common for Dah when they visit the U.S. On their most recent tour, this past March and April, Dah visited Washington DC, New York City, and two small East Coast colleges. This tour consisted of a workshop, and performances of their most recent piece, “The Shivering of the Rose,” about missing persons.

In addition to their strong presence in the U.S., Dah has made also an impact at home in Serbia. There are dozens of organizations in Belgrade whose work involves themes of antiwar and anti-oppression, and there are many socially conscious theatre groups around the world, but Dah is the only organization addressing such topics in Belgrade as a theatre laboratory.

Co-founders, directors Dijana Milosevic and Jadranka Andelic, intended for Dah to be a theatre laboratory modeled after theatre laboratories in 20th century Europe, enabling artists to develop artistically and personally for years.

While Dah’s performances often confront challenging topics like wartime sexual assault and nationalism, the group was not founded with a political agenda. However, the breakup of Yugoslavia and the events of the 1990s changed their initial focus. Serbia, under the regime of then-President Slobodan Milosevic [no relation to Dah’s director] of the 1990s, waged war with Croatia, Bosnia, and Kosovo. During this time, war crimes, sexual assault, ethnic cleansing, and genocide were rampant in ex-Yugoslavia.

“For artists with a conscience, at least for me…want to have a relation with the time in which we live,” said Maja Mitic, an actress who has been with Dah since the beginning.

“In the beginning we were not speaking about creating political theater. We were speaking about creating indoors in very safe conditions…what happened in reality was completely the opposite,” explained Milosevic. “We simply couldn’t close our eyes and ears to what is happening, and our ethic from the beginning was to use theater as a tool to oppose violence. This is all very important when it comes to activism,” she added.

The politics that impacted life in Belgrade in the 1990s inevitably affected many citizens on a personal level. “They start with the personal and everything has come from there,” said Barnett.
Their most recent performance, “The Shivering of the Rose,” developed from a previous performance, “Presence of Absence,” after two Dah members left the group. On a personal level, it was painful for Dah to lose these two members, but on a larger scale, it was “painful to hear the stories of the missing people, whose closest members of the families had gone missing,” said Milosevic. A goal of this piece was to “provoke compassion in people,” she added. Missing persons is a universal topic, not only relating to the former Yugoslavia, but also issues of human trafficking and immigration.

Dah’s members, in addition to their audience, are impacted by the ideas presented in their work. “I was shocked with my ignorance,” said Milenovic- Popovic. “A whole generation, and generations and generations are unaware…The problem is not dealing with the past…not admitting what happened,” she added. Before joining Dah, “I wasn’t aware…I wasn’t present.”

Dah’s response to the events in their country via the arts demonstrated a strong opposition to the denial of the wars presented by the Serbian government. Dah’s first piece, “This Babylonian Confusion,” staged in 1992, was able to “highlight the public silence about the wars raging in Bosnia and Herzegovina and Croatia- wars that the Serbian government had wholeheartedly denied,” said Olivera Simic in an essay about Dah and transitional justice.

Dah used personal reflection and activism to confront the wars very explicitly in “Crossing the Line,” a performance staged in 2009. In one scene, three women are seated on their own platforms on a stage miming traditional household duties. The woman on the left picks up a newspaper, and reads four lines aloud: “All the women and girls were being raped night and day by various men. On the bare ground, against the wall, vaginally, anally, and orally. At times, by several men at the same time.” She tells another woman onstage, these sentences are “fraught with atrocities.”

The stories in “Crossing the Line” are very powerful. When it is performed for widows from the war or Muslim women from Bosnia, “there’s a therapeutic…quality to that piece,” said Barnett.

The scenes in “Crossing the Line” were taken directly from “Women’s Side of War,” a book filled with compelling stories of horror and pain experienced by women in the former Yugoslavia during the wars of the 1990s, published in 2007. These stories were compiled and published by the Belgrade chapter of Women in Black, a worldwide feminist, anti-war activism group. Dah has collaborated with Women in Black through street activism and performance since the 1990s.

Neither the messages Dah disseminates from their work, nor their type of theatre, are mainstream. They have been able to do this because the arts face less censorship pressure than the news media in Serbia. “They don’t get a lot of critical attention,” explained Barnett. “Nobody goes to the theatre, so why does it matter” is the attitude that has carried from Tito’s time into today, he said. There is an assumption by those in power that arts cannot make an impact, which Dah has proven to not be true.

When it comes to Serbian reception of socially conscious art, “you have the extremely positive and the extremely negative, and you know who is the most negative- those who have never been here,” said Borka Pavicevic, Director of the Center for Cultural Decontamination, another arts organization in Belgrade. Dah has performed in the courtyard outside of the Center for Cultural Decontamination’s building.

“Generally our work was very well received in Belgrade and all around Serbia…we have a very faithful audience,” Milosevic said. “We did make an impact,” she added, “first of all really bringing this idea about devised theatre…that theatre can be made about a certain topic, that play is not the only way to create a theatre performance.”

Though Dah is not in the limelight of Serbian media, it is doing important work in a post-conflict society. “I’ve never known a theater to be founded and work within such difficult situations, as a decade the 1990s in Belgrade, and not just survived, but thrived, come through it all….All other theaters in Belgrade have shrunk…since the fall of Yugoslavia. Dah has grown…[and had] more impact and more presence than any other theatre there,” Barnett said.